A Failure’s Guide to Gardening

After four months of working on our 1200 square foot garden we have finally achieved success.
A ripe watermelon.
One. Stinkin’. Watermelon.
Below I will outline the path to our epic failure so that you can avoid the pitfalls we blindly stumbled into.
April
Andy had a blast tilling the rain-softened dirt at the western edge of our property. Soil, sand, grass and weeds could be seen up to 15 feet in the air and deep cries of “Woohoo!” could be heard from the house. Andy proudly climbed off the tractor and announced that the garden was ready.
May
Grant and I set about smoothing and marking out deep beds in the very rough space that weeks before was home to cacti and rocks. I sowed 15 varieties of seeds indoors and grew ecstatic when the little leaves began to appear seven days later. The developing vegetables reached peak size to transplant, so I hauled my gardening tools out to the empty plot and lovingly embedded each seedling into its destined spot.
A week later, the 72 plants that I spent two hours placing in the dirt were gone. The dogs had dug up and rolled on every single one of them. I was furious. But there was still time to recover from our loss, we just had to start again.
June
Andy and I spent two days erecting a wood frame and attaching chicken wire to fence in the future garden. Andy even made a cute little gate. I once again set about placing the seeds in their peat discs and still danced a little dance when the baby leaves poked out of the soil a week later.
I spent another two, although much warmer, hours transferring the seedlings to their garden rows and declaring war on the weeds that had managed to infiltrate the plot in the two weeks since I had left it. Andy worked soaker hoses around the beds and we began the wait.
July
The plants kept getting bigger, but strangely, we never found any vegetables hanging from the stems. People around town talked of their massive yields of tomatoes, while I just stared at green leaves. By this time, whenever Andy asked if I had checked the garden, my humph signaled for him to quit asking. Of course I checked it, but there was nothing of interest, and I had given up.
Until last week.
Last week I walked into the garden to discover that watermelons were growing! I then began to question how the watermelons were growing but nothing else had made a debut. That’s when I saw them.
The holes.
Six inconspicuous holes near the outer edge of the fence under the straw floor.
Gophers.

The plants had been bearing fruit, apparently good enough for the furry buggers to take home for dinner. I was strangely excited, it wasn’t that I couldn’t garden, it was just that I was being thwarted. The fence that we painstakingly built was an answered prayer for the gopher, seeing as our rodent-killing dog Missy couldn’t get in the garden!
August
So today, I sit here in my collapsible lawn chair with my 22 resting in my lap. Today is open season on garden-eating gophers. Don’t get me wrong, I’m not opposed to poisoning, trapping, or small explosions… I just need the target practice.
“Hey babe…where is our copy of Caddyshack?”

Have you ever stopped to stare at a blackberry bush? I mean really watch it with eyes trained and heart open?
A random black bird eyes the juicy blue-black fruit and begins circling, looking for a landing spot. It finally swoops low to the rambling bush and finds a swaying ledge to perch upon. Rustling feathers give hint that the bird is frustrated as he pokes his head in and out of seemingly open spaces, attempting to grab hold of the mouth watering fruit. The would-be thief eventually leaves empty-beaked, shrieking in anger as he soars away.
From my perspective I can see that the pesky thorns prevented the pillager from swiping the ripened fruit.
But what does it look like from the perspective of the blackberry?
I would imagine the fruit can only see the obstacles of vines and the walls of leaves blocking out the direct sunlight. The fruit can only imagine what it must be like outside its prison buried deep inside a grave of thorns. What the berry can’t see is that the thorns are really pillars of protection from unseen enemies that promise destruction and death.
How many of us spend precious time seeing only the things that hinder us? What if some of those things were really keeping us safe until we are ready for harvest? 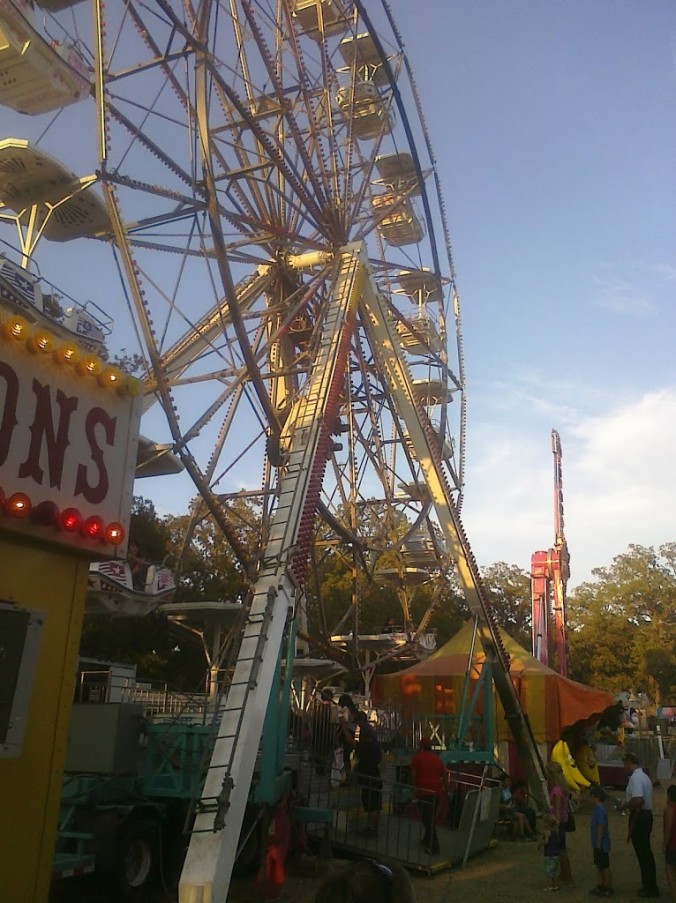 Old Settlers Reunion in the Eyes of a New Settler

Have you ever noticed that carnivals and fairs have a smell? You could bottle it without a label and ask people to take a sniff, and they would immediately say “County fair?”.
It’s a mix of stale sweat, buttery popcorn, vomit, and cotton candy. As a kid, you would happily wait in line for an hour to climb squeaky metal stairs only to plop down on a potato sack and fling yourself down a giant metal mountain. Tickets and stamps meant the world was your oyster, and they came magically from the pockets of parents like gifts from Santa.
As an adult, the fair is slightly less ideal. You eye every Carny and wonder what he’s really drinking in that travel mug. The teeth-clenching noises being sighed by the Zipper are more frightening than awe-inspiring. You refuse to ride, not because of safety suspicions but, because you are quite certain those never-washed-forty-year-old handles are the source of all flesh-eating bacteria. And you firmly believe the ticket booth is manned by Satan’s spawn when they charge your toddler $3 to ride a mini plastic horse for 30 seconds.
The pictures are priceless right?
Last week we spent an evening at the Old Settlers Reunion in our town. The steamy 99 degrees seemed downright cool compared to the daily high of 108 degrees. We had no idea what this event was, only that everyone kept asking if we were going to Reunion?
Why not?
As we turned into the dirt drive signaled by the signs to be the parking for Reunion, we were greeted with all the sights and sounds of a fair. The boys were abuzz in the back seat, pointing to everything they planned to ride that evening. We unloaded and set about scoring tickets, aka waiting for Andy to grudgingly part ways with his money, and deciding which parent was going with which kid to whatever ride. Slight problem, there are three kids and two parents, but eventually the older two gave the youngest one his own personal chaperone and we parted ways.
Andy and I could see that the majority of fair-goers were passing the carnival section and heading further back into the woods on dirt paths. When the tickets ran out, we convinced the kids to walk with us and we went exploring. The sun had just set and trees gave way to an Appalachian Mountain Margaritaville. Screened cabins heavily strung with Christmas lights filled every open space that would hold them. The left-over spaces served as competition courts for games of Washers, Horseshoes, and Redneck Golf. Hundreds of people moseyed from cabin to cabin in search of seldom seen friends and neighbors. Some of the cabins had weathered family names and dates painted across the gables.
The dirt path we had wondered down seemed to be some sort of portal to a simpler time. The cabin village was completely hidden and untouched by running water and high speed internet. We finally learned that Reunion began as a reunion of Civil War veterans and their families. Some of those families still occupy those cabins today. Being new to the area, witnessing this gathering from the outside was like secretly observing a foreign culture during a religious festival.
Inspiring.
If this many people can take an entire week of their spoken-for time and devote it to reuniting with family and friends, well then, maybe things are gonna be okay. Maybe people really do know what’s important, and will brave skin-melting temperatures to grasp it for a short while.
And by important I do mean the cotton candy… 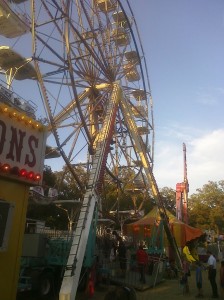