“Oh crud!”
The car tires squeal when I turn hard left for the u-turn, as I once again take the wrong kid to the wrong activity.
“Momma, what are you doing?!” Sam shouts.
“She was going to the wrong place again.” Grant calmly states while looking out the window.
“Why didn’t you tell me I was going the wrong way?” I ask Grant.
“You’re the mom.” He states.
Yes, I’m the mom. I’m the sole administrative assistant for, count ’em, five people. I have to know where, when, and how each person is supposed to be at their designated recreational activity. Not to mention making sure they have clean underwear, haircuts, homemade lunches, and dinner in the oven.
Don’t get me started on the two dogs and two cows.
The kids have activities every day except Mondays. Oh, and school. Which has presented it’s own problem because I keep going to the middle school when I am dropping off Grant, and he is supposed to be at the Intermediate school the next block over.
I imagine next year when he is supposed to be at the middle school, I will finally remember to turn at the intermediate school.
Baseball practice, baseball games, youth group, my volunteer activities, and the newbie… shooting club.
No my friends, that is not a typo.
Grant’s new favorite hobby is 4-H shooting club. It’s like golfing….with guns.
The first drive there was interesting. Andy had been there many times for his own recreating, but I had never been to the shooting grounds before. The turn into the rock drive was easy enough, but then came the roller coaster hills under heavy tree canopies. A beautiful place, and strange in this area where most land is flat. Professional signs were places so often with course names engraved on them and golf cart paths leading away.
We finally made our way to the lodge and went in to place Grant’s name on the sign-in sheet. The owner assured us that as soon as the league moved out of the area, the kids could begin practice.
Leagues?
“Yep, like bowling.” She smiled.
Just like bowling leagues, on courses like golfers… but with guns.
Hmm.
At the end of practice, his shoulder is firey red from the kickback of the gun, but he claims it’s worth it. He could be sick as a dog but he will not miss practice. He may only hit five out of twenty-five targets, but he’s smiling the whole time.
I have searched for years trying to help Grant find the hobbies that interest him. The search has been challenging. Turns out, he’s going to be a trumpet-playing, tractor-driving, sporting-clay-shooting teenager.
Pray that I don’t get the shooting and baseball bags mixed up…. 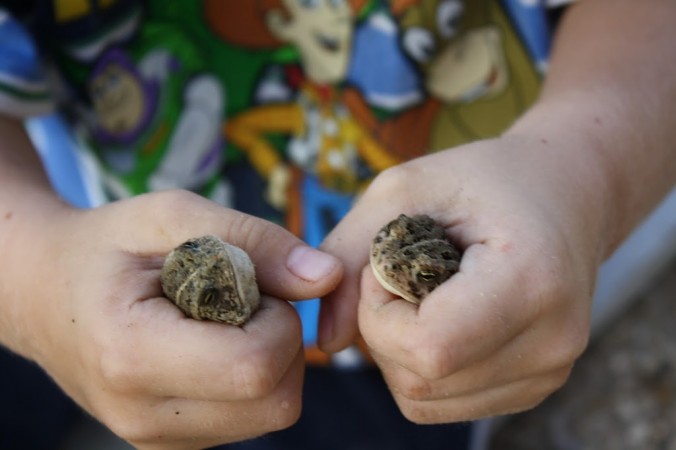 What goes through a little boy’s mind when he sees a mountain of dirt and an abandoned piece of plywood?
Homemade slide!
What schemes mingle in a little boy’s mind when he sees a matchbox car and a plastic spork?
Catapult!
And what does a little boy do when he finds a propane tank well full of Texas toads?
He takes them swimming in the pool of course!
It’s a bad thing when your brain finally puts together the words from another’s mouth that include, “check, your child, frogs, and pool.” First you just stare at them like they are speaking Chinese, then you fly out the back door yelling incoherently. The kids may not fully understand the shouted words, but suddenly toads the size of baseballs start flying out over the sides of the pool onto the grass.
Except the last one.
Three little boys chasing an Olympic breast-stroker around a circular pool is quite a sight. Enough to make you laugh when you should be crying… 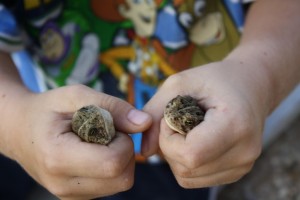 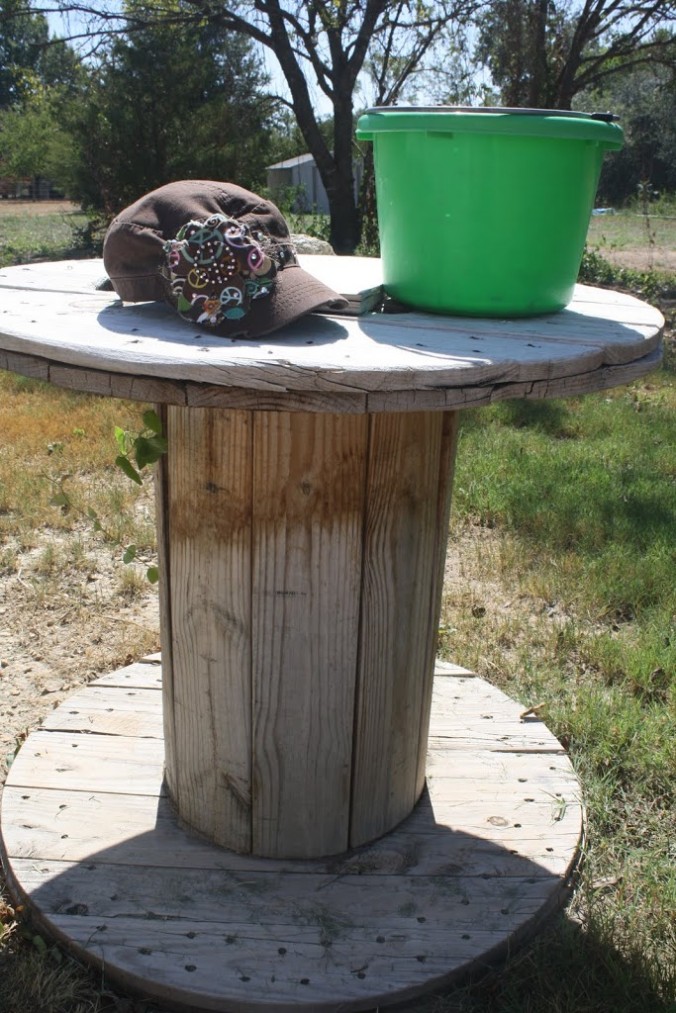 A Bucket and a Ball Cap

“If you flush your toilet with buckets of water from your above-ground pool….you might be a redneck.”
Sounds like a skit from the Best of Jeff Foxworthy but, alas, I made that one up after a very…very… long 24 hours.
I awoke on a glorious, cool, Labor Day to birds chirping and Andy running through our room on his way outside mumbling frantically “I think our well went dry.”
For all you city folk, those words are akin to the newscaster saying that the city water workers went on strike and you are…well…buggered.
We had been paying close attention to the well for weeks after hearing that many locals are dealing with dry wells due to the severe drought in Texas. We had been watching for the signs: salty water, sandy water, changes in pressure. And on Monday, we woke up to no warning and no water.
We contacted the neighbors, and they still had water. So we were both hopeful and fearful that something had happened to the pump. These kind of fixes are not the cheap kind, but much cheaper than digging a new well.
So how do you get the well fixed on a holiday?
You don’t.
You drive 45 minutes to your family’s house and shower.
Then you buy water in plastic jugs, and dig around the shed for a bucket for the only female living in a house of boys. The males of the household may be able to visit a tree, but I did not want to have to explain to a new doctor in a new town how I got poison ivy on my…never mind.
So a bucket, strong boys to haul the water up stairs, and a ball cap were the answers to my dilemma.
No, not just a ball cap.
A bedazzled ball cap.
The one Andy makes fun of.
He can have his stinky boy hat, but all a girl with no running water really needs is a bucket and a sparkly baseball cap.
I am happy to report that we only had to suffer for a little over 24 hours. A switch blew, activating the emergency shut down. The whole situation was yet another reminder that this is not the city, and you never know what you will wake up to find… 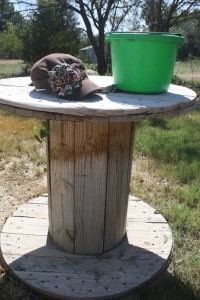