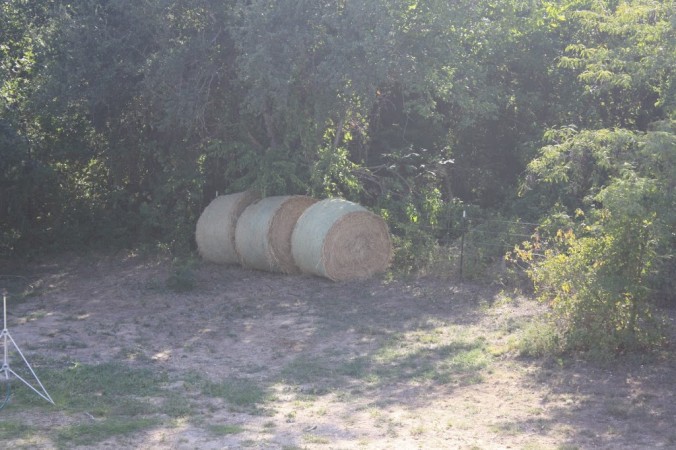 What would make a mild mannered, slightly eccentric software engineer pull a Dukes of Hazzard car spin to block the road from a truck pulling a trailer?
Hay.
Crunchy pastures full of dying grass and shrinking cows can drive a man to madness…make him believe his rash, crazy behavior is justified.
The moment my husband caught sight of that hay being hauled down our road, he lost all pretense at status quo. He had to know where that hay had come from, and he wasn’t gonna let that driver go until he told him.
Luckily that driver was a Hay-Man, and Andy wasn’t his first crazed rancher that week.
Is is strange that I never considered hay a business?
Like an actual career field?
I never considered hay at all really…until I needed it and it refused to be found.
Calling feed stores up to four hours away yielded no success. Hay dealers in Oklahoma laughed when I phoned to ask if they had what I sought. I became an eavesdropper, my ears tuning in to any hushed conversation where hay was mentioned. Procuring hay in Texas right now is harder than hiring a hitman.
Not that I would know…
After Andy pulled a roadblock move that would have made the Duke boys proud, we found that a Hay-Man works three ranches away from us. His only business is to make sure his customers have the hay they need. Usually he harvests it personally, but this drought afflicting Texas will have him driving all over the country to make sure his people are supplied.
It was like Christmas when that Hay-Man drove his mighty tractor down my drive with those big ‘ole bales of golden goodness. Who thought I could be excited about dried grass?
Well, my cattle ranchin’ profit comes by the pound and those cows aren’t getting fat on water. Although my profit is going to be plucked away in feed this year since hay cost more than twice what it cost last year.
I sure do like Capitalism better when it benefits me.
I am just thankful that my husband’s boldness will allow me to dabble in those back-alley meetings where the desperate gather for any information available. Now I can whisper in the shadows, “Hey, I know a guy…”