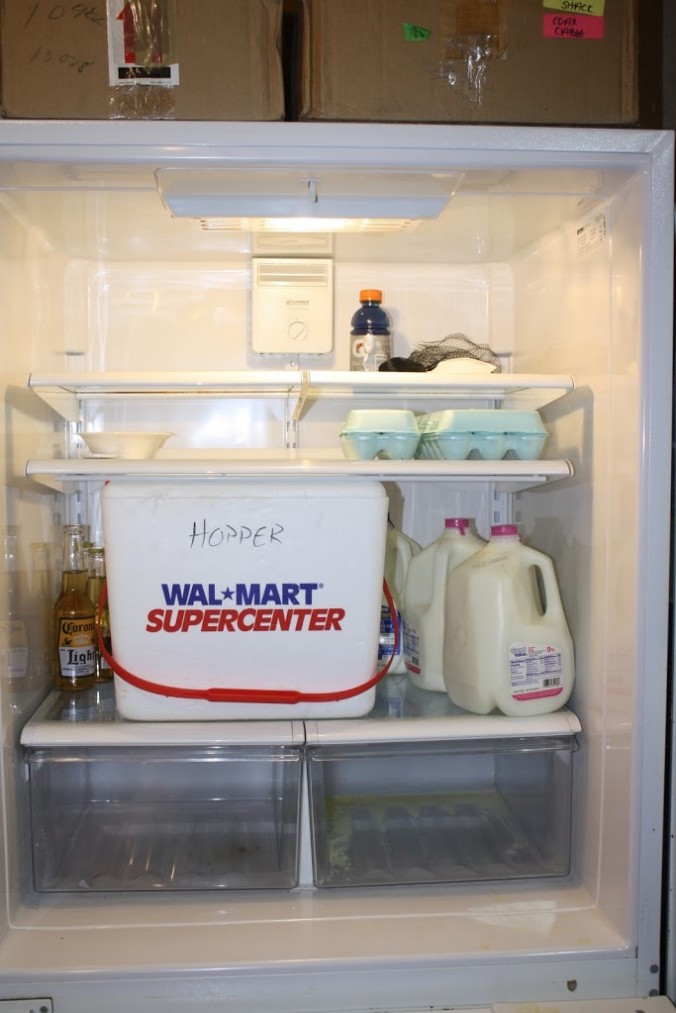 I Know What You Did Last Night

You never know what you will come home to after a long evening amongst the people of Walmart. Usually, it’s kids up way past their bedtime who haven’t been fed or taken showers and forgot that the family room is not the floor of their closet. Children whose daddy has a convenient shop in the basement where he can hide from such horrors until momma comes home.
On my last trip for milk and bread, I opened the secondary refrigerator in the basement to put away the milk and found a surprise.
Dinner!
Only, it hadn’t been cooked. Or cleaned. Or skinned.
But hey, as the man of the house said, “It’s dead ain’t it?”
Imagine my shock as I peeked inside the mysterious cooler residing in my fridge and found…

Turns out, Andy had been doing some target practice in the back pasture and the little guy hopped in front of the target. Why shoot at pretend animals when you can shoot a real one! Only, those of you who know my brilliant husband also know that he is a tad bit squeamish.
As in he faints at the sight of blood.
So guess why the rabbit was in the refrigerator? He thought he could talk yours truly into turning the dead rabbit into yummy stew. Only, he shot the only part you can actually eat.
So Andy’s surprise hunting trip turns into snack time for our dog Missy and the local coyotes get leftovers! 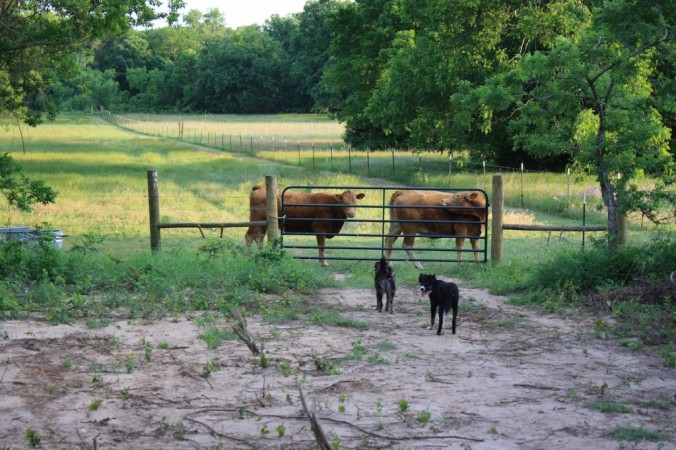 A cow is just a cow right? A nice steak or a tall glass of milk. As a city girl, I certainly never thought of bovines as anything other than a line item on a grocery receipt.
Turns out I was wrong…
It was only slightly disturbing when I began to be able to distinguish happy cow face from sad cow face. When I could see from their expressions that their intention was to mow me down or eat out of my hand a few months later, I figured that was just normal.
Now I find myself avoiding the back windows and the rear view mirror. Knowing that if I even dare glance at the back pasture it will be waiting for me.
The moo eye.
Under normal circumstances our cows are a lot like giant dogs. They hang around while we work in the back. Waiting patiently as their food is rolled toward them, then planting their faces in the bale like a college kid at a fraternity pie-eating contest. The giant snacks are supposed to last two pregnant cows at least 4 weeks but we are always lucky if we get three.
Until the last hay delivery.
Everything was fine when we rolled the metal ring over the bale and stood back as the girls approached. Raising their heads over the cold bars, they took one sniff before taking two steps backwards. Andy and I looked at each other with confusion as the cows stared at us unblinking. Andy walked forward and pulled a fist full of hay from the bale and offered it to our alpha cow, Jenny. Keeping her eyes trained on him, she treated it like a toddler testing a pea that must be eaten before the cookie. Then she let the golden strand fall to the wet ground.
She might as well have just pulled a five dollar bill from my pocket and flushed it down the toilet. Hay bales are going for over one hundred dollars a piece right now! Disbelief replaced confusion on Andy’s face and he began to reprimand Jenny. He explained, at length, that cows eat hay and the giant ball of dried grass was her dinner. Our other cow, Clara, finally joined the party and mirrored Jenny’s movements as she looked from the hay to Andy each time he pointed to the bale. Throwing his hands in the air, Andy stomped off with the words “stupid” and “cows” trailing after him.
We stood at the gate for along while, waiting for them to finally dig in like they usually do. They just stared back. The patient glances became violent stares that continue to follow us each day as we venture outside of the house. Turns out our girls don’t much care for Missouri hay. The taste, the smell…who knows? I only know that they will take nibbles, give me the moo eye, then move on to grazing.
I’ve tried explaining that the summer drought means no Texas hay, but they won’t listen. Every time I glance out the window, there they are. Staring at me. Like the dripping child ghost in a horror movie…the moo eye follows my every move.
So when you eventually read about the woman they found screaming at cows in a pasture and how they had to place her in a pad-locked cell, you will know the truth.
I was provoked.