Sticks and stones may break your bones,
but trampolines and monkey bars always will.

**Special thanks to the following people who made sure I did not lose my mind on the day above: Melissa Beard- the school nurse, Mr. Sorg- the principal, Dr. August, the x-ray tech in Decatur, Angie- my sister-in-law and nieces who sat beside us in the hospital, everyone who called and made sure we were OK, and lastly my parents without whom I would have pulled out every hair on my head:) 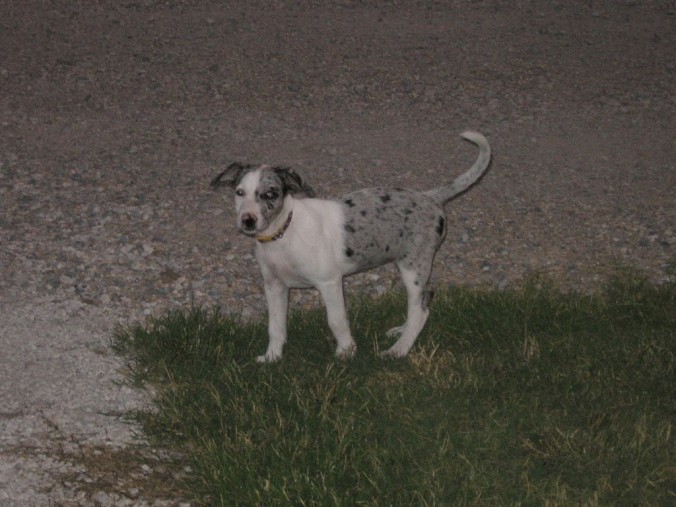 A Bayou State of Mind

Louisiana seems to have put a spell on us. We are pretty normal, logical people…stop laughing… but every time a crazy-spur-of-the-moment adventure presents itself it’s beckoning us to the Bayou State.
Take the purchase of the Mystery Machine. Sure there were conversion vans to be had in the Metroplex or even the state of Texas. But New Orleans offered us a deal we couldn’t refuse, even with the one-way airfare and the 9 hour drive back. That trip barely qualified as spontaneous- we had 3 days to plan.
The plan-time for the most recent trip to the land of Blues?
One. Hour.
We’d been half-heatedly searching for a rescue puppy to bring home to help ease Missy’s sadness at loosing Jessie. After happening upon a Craigslist Ad for a half Catahoula/ half Hanging Tree Dog, we contacted the owner and made arrangements to pick up one of her remaining puppies.
Now we had been praying for a dog that would be perfectly matched to our unusual pet requirements: brave, able to free-roam the acreage, not a small puppy (cause those tend to get taken by either hawks or coyotes), and male.
I texted for the pickup address on Saturday morning and was plugging it into the GPS until I got to the very last part: LA.
What?
LA as in Louisiana?!
We were so upset. There was no way we could or should drive 12 hours to pick up a puppy that was 1.) only 7 weeks old and 2.) a female.
This tidbit of an animal did not meet the requirements.
But we couldn’t get her off our minds- the little ball of fur looking back at us from our cell phone screen.
Then it started to rain. For those of you who know my husband, you know he hates idleness. Rain= idleness on the farm. Or impromptu building projects…
So imagine my surprise when he uttered, “Let’s just go get her.”
Her as in the female puppy? In another state? Six hours away?
“But we would have to stay in a hotel and get her in the morning.”
“We have all those free Hilton points…”
So an hour later we were attempting to free ourselves of the perpetual Dallas traffic on our way to the land of alligators and crawfish. We spent the next six hours in the Mystery Machine and landed late at night at a hotel. Early the next morning we met the lady halfway to pick-up the dog. As we walked up to the truck we could see four little ears poking up from the back seat. The lady had brought the puppy intended for us AND the remaining puppy from the litter.
The woman explained that she thought we may actually prefer the other puppy, a female that was more of a “go-getter”. We spent five minutes with the two puppies and picked the one she suggested. So our plans for a 6-month-old male were thrown out the window when we fell for a 7-week-old female.
We named her Luna (for Luna Lovegood from Harry Potter) and let her sit in the backseat of the van with Ian. She immediately put her head on Ian’s leg and every time he tried to move, she would place her paw on his leg and pull it back, then lay her head back down.
The little blue-eyed squirt is the the bravest dog, besides Missy, that I have ever seen. She already comes when we call her, she is able to be left alone outside for small periods of time, stays close to the house, and my favorite- she barks in the face of a 100-pound neighbor dog like she’s not to be messed with.
And he listens. 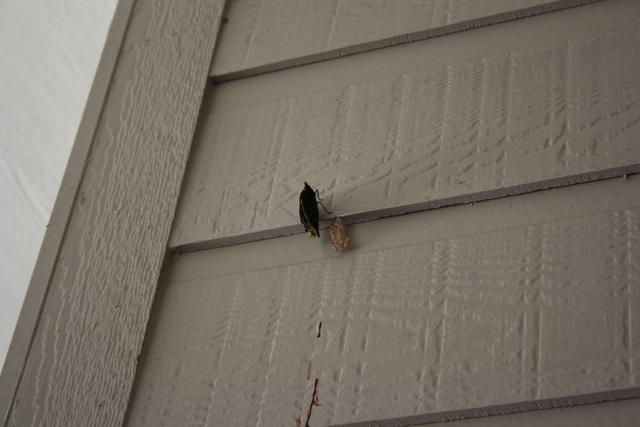 Communing with nature used to mean hiking 2 miles up hill both ways, as the only girl on a male-filled camping trip, to find something that resembled a toilet.
Now it means stirring my iced coffee on the porch swing and watching barn swallows fight over who is going to sit on the eggs.
Ah. The good life.
The porches have been filled with caterpillars and the siding has been playing host to dozens of chrysalises. I love to identify the little squigglers as they race across the wooden boards. In fact, I would much rather spend my time allowing caterpillars to climb my arms than do dishes.
So I do.
I have been able to identify and watch both Mourning Cloaks and Tiger Moths emerge this Spring. Soon to come? The Painted Ladies and Monarchs! The toads are just starting to appear around the house and the mornings are heralded by the gobble-gobbles of wild turkeys.
A few mornings ago, Andy was drinking his coffee on the back porch when one such Thanksgiving delicacy took a stroll on our driveway. He raced into the house to get his hunting rifle only to skid to a stop in the kitchen and smack himself on the forehead shouting, “I don’t have a turkey license!”
Boy was he grumpy after that light-bulb moment.
He sprawled on the outdoor couch and mumbled incoherently to himself for the next 30 minutes as the turkey paraded just below him- seemingly aware that he could not be touched.
Thankfully I have not found any more dead rabbits in the refrigerator, but that may be due to the boys and I warning every naive rabbit we see hopping along not to get too close.