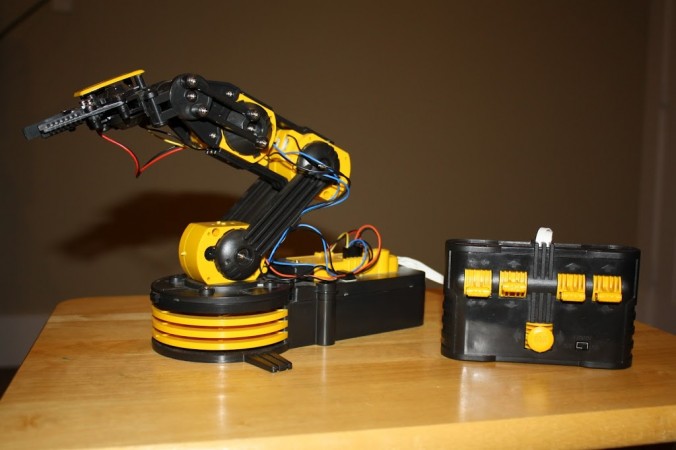 Last fall my oldest son, Grant, would jump out of the car after school and disappear into a workshop in the basement that he and his dad aptly named Engineering. He locked himself away in the cave-like room for over an hour each day before emerging to rustle up his afternoon snack.
After a week or so of this pattern, I finally asked him what he was doing in that tiny room for an hour. He reached into his backpack, pulled out two music tuners and declared, “The kids in band keep breaking their tuners so I fix them and take them back the next day.”
I stared. Then blinked.
“How do you fix them?”
“I solder the broken wires then put them back together.”
More blinking.
“You’re eleven.”
He gave me the duh look.
“Are you getting paid for this?”
“No.”
I gave birth to the Tech Dude. You know the one in teen television dramas  that helps the popular savant save the world? Or the guy on the crime dramas that finds the terrorists with a cell signal minutes before they blow up a building?
So months later, when he disappeared into Engineering with a UPS package, I ignored his shouts of joy. He said something about a robot, but I had laundry to fold.
Five hours later, I was slightly concerned. There is no bathroom in the basement, and Grant had never come out. Just as I was about to send in the rescue party, he walked up the stairs holding a yellow, robotic arm.
His hair stood straight up from his head, and his eyes held a certain wild quality. With the care of a new father, he set his creation on the kitchen table and took two steps back to admire his masterpiece.
I had to ask. “What does it do?”
Grant looked over at me like he just realized I was in the room and said, “It grabs things.”
I pursed my lips and obeyed when he called me over to place one finger six inches from the mechanical pinchers. He started pushing buttons and levers on a remote control.
I waited.
One Mississippi, two Mississippi, three Mississippi, four Mississippi, five Mississippi…
Finally, on the sixth Mississippi, my finger found itself trapped in the plastic fingers of Roboarm.
“Isn’t that awesome?” His face beamed.
“So if you have a few days, it could be a rockin’ pick-up sticks partner?”
He ignored me.
“Congratulations babe, you just created the worlds slowest automated nose-picker.”
Again, like I was surrounded by the cone of silence.
“Great job sweetie.”
He smiled. “Do you want the robot to help you make dinner?”
“Only if you can wait two weeks to eat…” 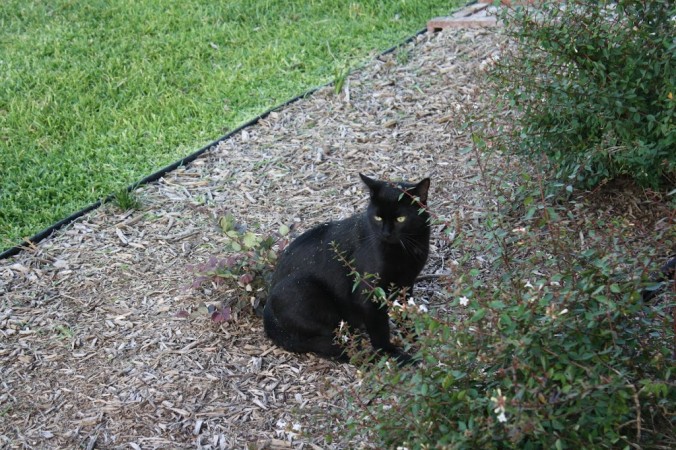 I have a tensie-wensie obsession with caterpillars. And butterflies. How could I not? Butterflies are the grown-up version of fairies…colorful and magical.
Yes, I said magical.
Do you know any other creature that can turn from a hairy worm into a delicate-winged creation whose beauty can only be masked by flower blossoms?
It’s the stuff of rainbows and unicorns people!
So imagine my horror when I walked onto the front porch recently and heard a loud WHAP! I looked over to see Mr. Spock eagerly pulling the wings off the butterfly he just murdered. Or my guilt when I rushed into the garage only to find that the concrete floor had become an open-air cemetery for butterflies of all kinds.
My cat is a killer. Not of creepy, gross things like mice and snakes, but of perfect, sweet flutterbys. And in true Funny Farm fashion, the cat has taught the new puppy, Luna, his evil-hunting ways.
While floating in the crystal blue pool yesterday, I looked over to see the puppy staring up at me with butterfly wings flapping frantically from the sides of her closed jaws. Mr. Spock lounged on the pool deck and stared lazily at Luna, a smug grin behind his long whiskers. I grabbed him with soaking wet hands and gave him the stink-eye.
“Not cool Mr. Spock. Not. Cool.”

Cows are back! Two mommas, two calves and two buns in the oven!

Most of you probably know by now that I have jumped head-first into the world of writing. I attend meetings and workshops where creative and eclectic people critique one another’s words with blood-red ink and where brainstorming sessions appear more like group therapy for those who recently suffered psychotic breaks.
Recently, I entered a writing contest with a short story based on our experience with a wildfire last year and I won! After I spied the congratulatory letter hiding in my Inbox, I ran out to tell the kids what had happened. They all looked up from their respective electronic devices and said, “Good job!”
Sam then expounded on his congratulations when he said, “That’s great Mom. Can you record Pair of Kings off of Nick Jr.?”
Oh well, for those 15 seconds…I was a superstar. 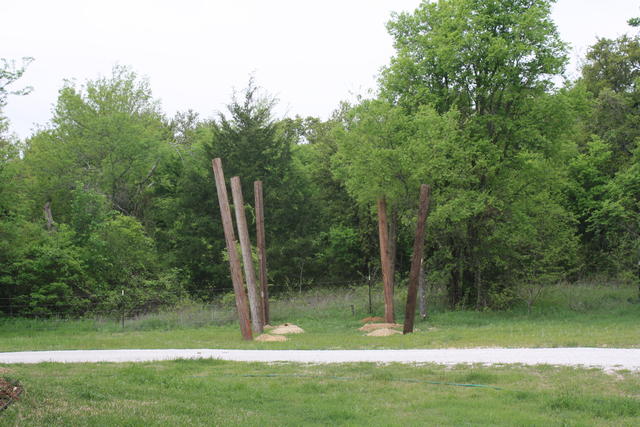 The decision to purchase a conversion van eventually led to a series of events not unlike the Children’s book, If You Give a Mouse a Cookie. A story that chronicles how one tiny choice can give way to a litany of situations that make you question why you ever thought feeding a rodent was a good idea.
So here is our version of If You Buy a Mystery Machine:
One day you decide you have had enough of the complaints emanating from the back seat about the lack of leg room so you search the Internet for conversion van deals. The best deal comes from a dealership the next state over so you to buy one-way plane tickets. You can’t afford to buy the plane tickets for you children so you have to find someone to watch them.
After finding someone to watch your kids, you board the plane, fly a short jaunt, land and then realize you have no car to drive to the dealership. So you have to rent a car. Then you are able to drive to the dealership and purchase your new vehicle, but then you have to return the rental before driving 9 1/2 hours back home.
When you finally make it home, it begins to storm and you find that the van does not fit in the garage and that you must build a carport to protect the new addition. So your engineer-husband decides that he can design a much stronger car dwelling than anything available and that results in dragging small telephone polls across the county on the back of your trailer. Unfortunately, small telephone polls are super heavy, so a day of strenuous activity akin to an Amish barn raising must take place.

Once woodhenge is erected, the cross-braces must be installed. This requires rope pulleys to hoist the beams overhead while one person (yours truly) stands underneath as the anchor while wearing a child’s baseball helmet. By the way, the helmet will not prevent brain damage if the person holding the drill above (the husband) manages to drop the massive 2 x 6 beam onto the anchor’s head. 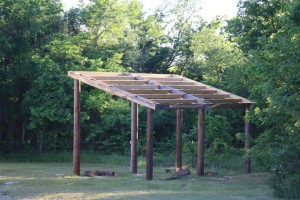 Only one close-call later, the bones of the structure are complete and you must install the roof that will protect the out-of-state van from the elements. But roofs involve heights, of which the inventor of the structure is afraid, so reinforcements must be called. One weekend later, two guys lured by the promise of homemade barbecue complete the roof and you can now park your whim under a structure that could easily survive another world-wide flood. 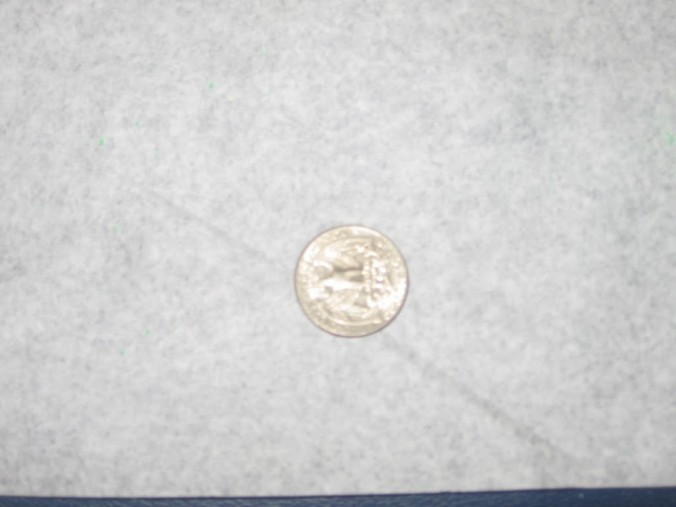 C’mon, I know I’m not the only one who has endured red-faced moments in public due to my child. Moments where I have wished there was a rock to crawl under and prayed to God that a time machine would suddenly appear and take me back just five minutes.
Like that time that I sat at Chick-fil-A with a table of my playgroup moms while 2-year-old Sam played in the indoor playground. My back was to the large viewing glass and I heard laughter break out around the dining area. Soon someone said, “That little boy is naked!”
Please don’t let it be mine, please don’t let it be mine. Then I turned and gazed upon the pale white buns staring back at me.
No such luck.
I hauled my pregnant (with Ian) body out of the chair and waddled as fast as I could into the play area. I wedged my wide behind between Sam and the viewing audience while trying to wrestle him into his shirt.
“Honey, you cannot take your clothes off in front of other people, you know that.”
“But Momma, where did my Superman clothes go?”
“What sweetie?”
“My Superman clothes should have been under my Sam clothes.”
“I guess they’re at the cleaners.”
“Oh.”
Unfortunately that was not the only time that I have been traumatized by my kiddos. Today for instance, was just another event for me to add to the list of things to get them back for one day.
Today Ian got his cast off. Today should have been an event-free day at the outpatient hospital, but as the nurse pried the cast free of my son’s arm she blurted out, “There’s a quarter in here.”
I peered over her shoulder. “What?”
Low and behold, a quarter, caked with dirt, lay plastered to my child’s hand.
“How did that get in there?” I looked to Ian to provide answers but he only shrugged his shoulders. The nurse turned to me and said, “I will have to go document that we found a quarter in his cast in his file.”
If this had happened to me with my first boy I would have curled up in a fetal position on the floor and started bawling. Ian being my third boy?
I took pictures.
Having three boys has done wonders for my sense of humor. And I am so grateful that, one day, I plan to return the favor.
Anyone else want to share a red-faced parental moment? 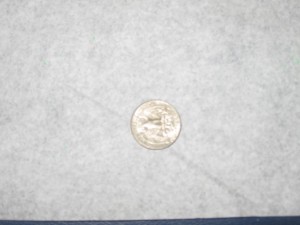