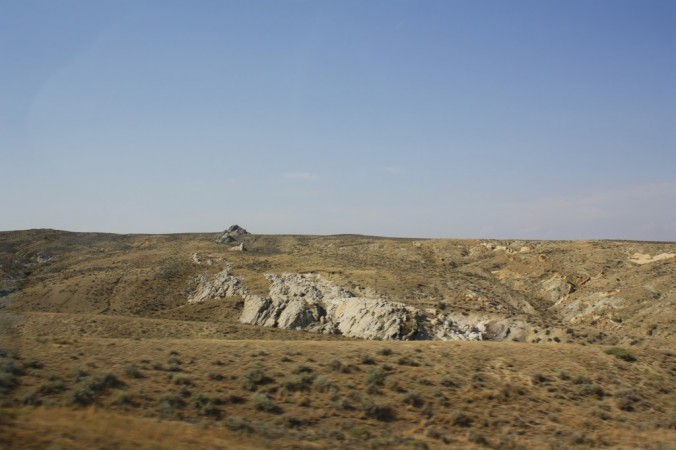 The fun thing about camp grounds is that they frequently have playgrounds and even swimming pools. These are much appreciated by the parents who must survive the confines of vans and trailers for lengthy vacations with little ones under foot. Sam and Ian were happy to swing the second morning while Grant, Andy and I readied our hotel-room-on-wheels.
The rest of the day was spent on the road, traveling through eastern Colorado to Denver then up into Wyoming.
Andy drove the van and trailer through Wyoming during terrifying wind gusts and frequent storms  which was an experience not unlike paragliding in a hurricane. I eventually took over during a stop only to play Chinese Fire-drill fifteen minutes later when the sky turned black and the rain poured down again. I’m not sure why he didn’t think I could handle it, there were mumbled phrases like, “can barely reach the pedals” and “don’t want to die” as he settled back into the driver’s seat.
When the storms and wind finally left us, Andy and I spent a lot of time staring out at the nothingness that is south and central Wyoming. Turns out, Wyoming looks a lot like New Mexico.

Until you smack head-first into the mountains.
They come out of nowhere.
We traveled along the Wind River Scenic Byway, where we wound through a steep-walled canyon. We paralleled old train tracks, spying rickety tunnels made of wood and nails that disappeared into the sides of the mountains.
Then, like being shot from a gun, we were propelled out of the valley and closer to Cody, Wyoming.

The drive on day two was only ten hours and was summed up by Ian who grumbled from the backseat as he rose to exit the van, “I can’t feel my butt.”
We pulled into Yellowstone Valley RV Park around dusk and found our assigned place next to the river, in the shadow of the mountains. We made tacos on our little outdoor kitchen and lounged in the camp chairs with the sound of rushing water in the background.

Nature provided the entertainment that night with a surprise meteor shower. Ian described it best when he climbed into my lap and whispered into my ear, “Momma, God sent us fireworks.” 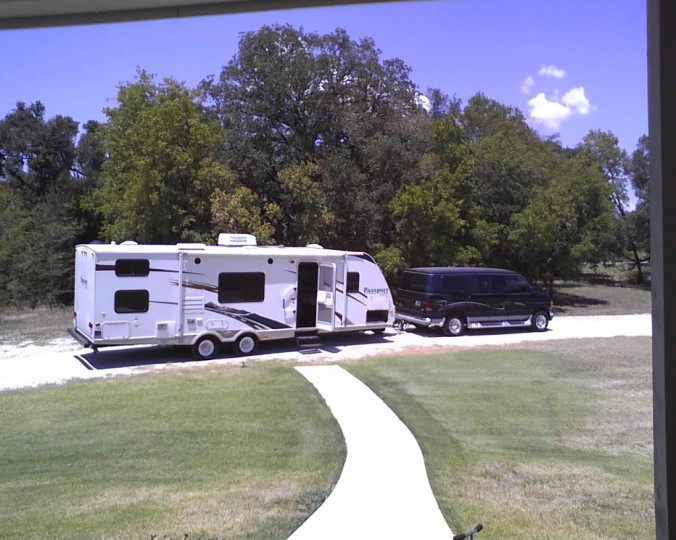 We here at the Funny Farm can create havoc from the smallest of things, so let your imagination run with the image of us all piling in the Mystery Machine and pulling a 27-foot-long camper halfway across the country.
Oh, and we have never used, pulled, or stayed in a camper before.
Forget baby steps…
The first day, we busted out of town early in the morning knowing that we had at least twelve hours of driving. Note to self: the driving time that Google Maps calculates is for cars that can actually travel the posted speed limit, not for elephants pulling whales uphill.
The drive went pretty well, considering everything we knew about the camper had been learned on YouTube only 24 hours before take-off.
We stopped a lot for gas, averaging only 7 to 8 gallons per mile. There were some close calls while trying to maneuver around the fuel pumps- wanting to avoid the big balls o’ flames that can occur after side-swipes by RV newbies.
We drove through Texas, Oklahoma, and ended the day in Limon, Colorado at a KOA Campground.
Watching Andy and Grant as they attempted their first RV hookup in the waning light was good, wholesome entertainment. Good thing ’cause we didn’t have a T.V.
We felt truly accomplished as we all piled into our prospective beds that night. Andy commandeered most of our mattress since it was only long enough to hold him above the shins. Thankfully I am an adaptable person, because I spent the rest of the ten days sleeping in a coffin-sized space so that dear hubby could sleep diagonally. I also learned how to take ice-cold showers, and share one port-o-potty-sized bathroom with 4 males.
Good times. 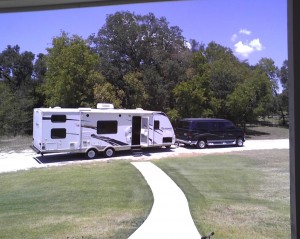 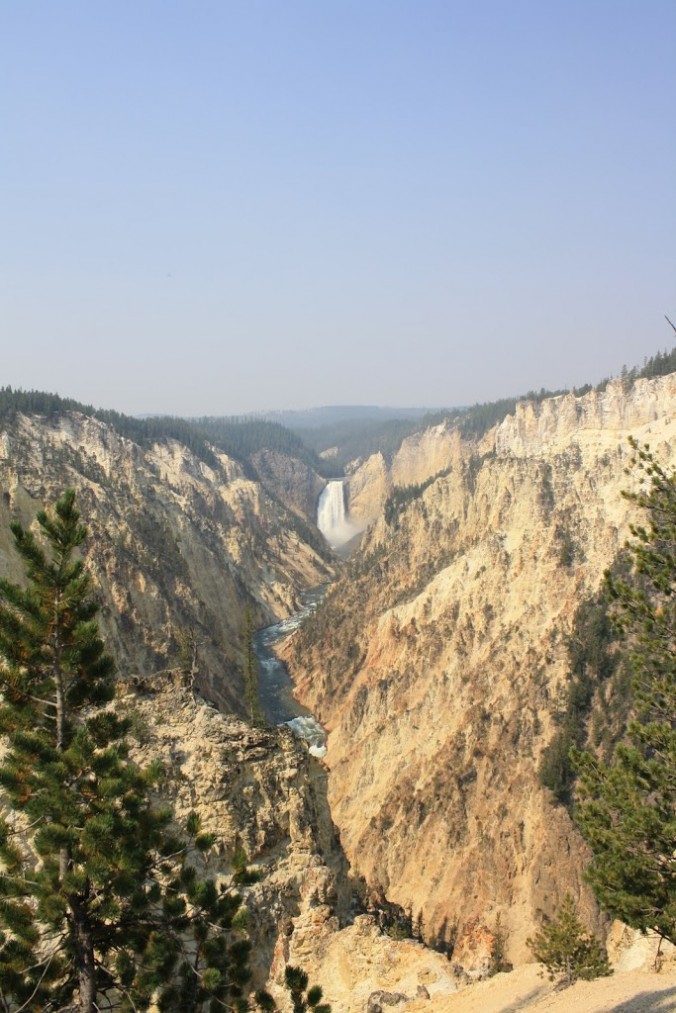 The Funny Farm Hits the Road

We try to take a family vacation every year, but as you can imagine, five people bring at least five opinions to the table in the discussion about where to go.
Grant and I are beach bums. Set us in front of an ocean for seven days and we still don’t want to go home.
Ian and Sam are theme-park junkies.
And Andy? Well he is a national park/ history buff. We nary pass a battlefield that doesn’t end up as an unintentional stop with a picture of the kiddos posing next to a cannon.
Last year the family indulged Grant and I with a week of pure bliss on the beach and nights of grilling fresh saltwater fish under the stars. Heaven.
This year…it was Andy’s turn. He chose Yellowstone and Grand Teton National Park.
As we pulled out the maps, 7 states worth, we could see that the drive alone was going to take 6 days.
Further research brought up the subject of grizzly bears and the mention of bear spray. To this, Sam walked away mumbling, “Why can’t we be a normal family and go to Legoland?”
To which I replied, “Why would you want to go stare at plastic blocks when you could be mauled by a mountain lion?”
If  looks could kill that boy would be serving a life sentence.
The trip was so long and yielded so many stories that I will be writing a blog for each day of our trip. I will include lots of information for those of you crazy enough to try to follow in our footsteps.
For now, a picture to wet your appetites. 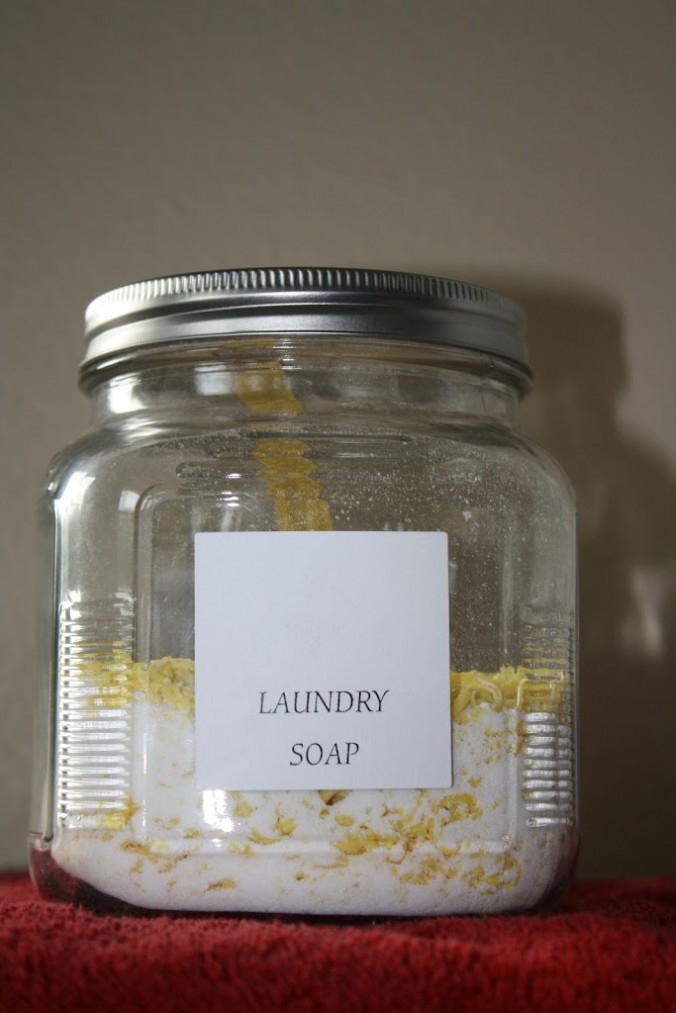 Everyone here at the Funny Farm has undergone a significant change since we moved out where the longhorns roam.
Pioneerification.
When the kids are cold in the winter, they don’t walk over to the thermostat. They run out to the woodpile, bring 3 logs of hardwood and 1 softwood piece up the stairs to the fireplace. They ask yours truly to light a fire, offering handfuls of recycled newspaper and matches.
Living out in the boonies has turned us green. We all have a much better understanding of the importance of rain, the miracle of life, and the value of creativity and hard work.
We have a garden. We save our vegetable scraps for stock. We conserve our water, recycle, and reuse. We find ways to make our own cleaners so as not to damage our best friend… Mr. Septic System.
The desire to prevent any kind of bonding experience with the septic has led to homemade laundry detergent. Not only do we have to protect what goes out of our pipes, we have extremely hard water. The tricks I have learned in my battle against hard water stains could fill a small book.
So for those of you who suffer as we do, I am sharing the laundry detergent recipe that works best for us.

Combine the ingredients in a glass jar with a lid. Shake well. Use 1 Tablespoon for small to medium loads and 2 Tablespoons for large loads.
All of the ingredients can be found in the laundry aisle at Walmart.

**When grating the Fels Naptha bar in the kitchen, be sure to tell the kid grabbing a handful that it is NOT grated cheese before he sticks it in his mouth.
Or don’t:)