Mother’s Day usually equals burnt toast and home-made cards. Gestures from little hands and hearts that I will always cherish. But this Mother’s Day was filled with hand-made presents of another kind entirely.

Handy Hubs spent the weekend building a pergola over the west side of the back porch. 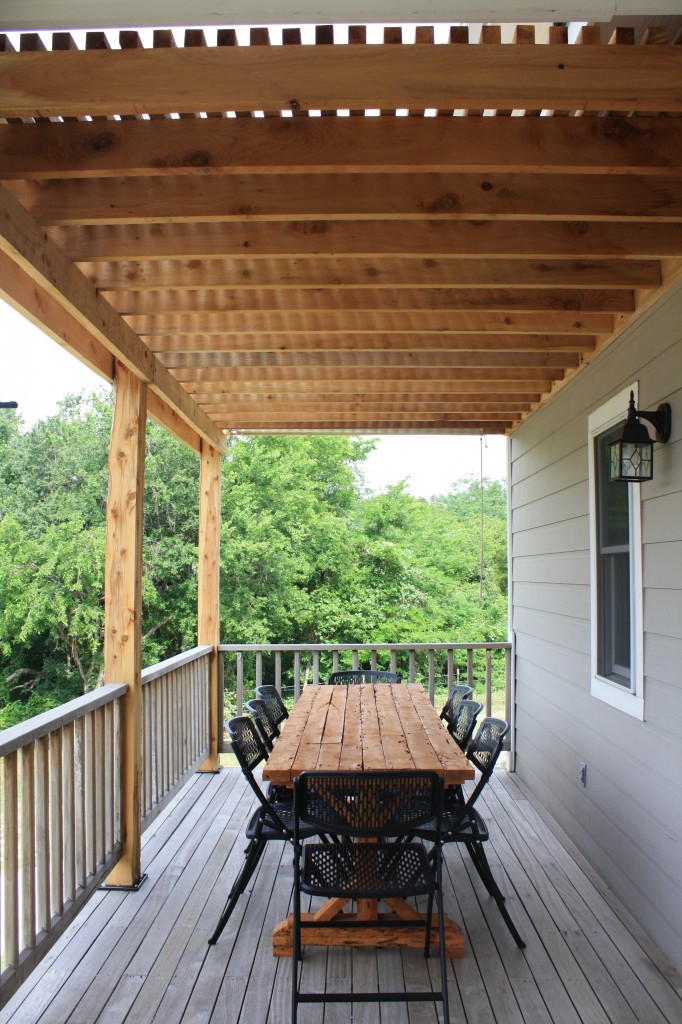 I’m really starting to love his burgeoning obsession with carpentry. 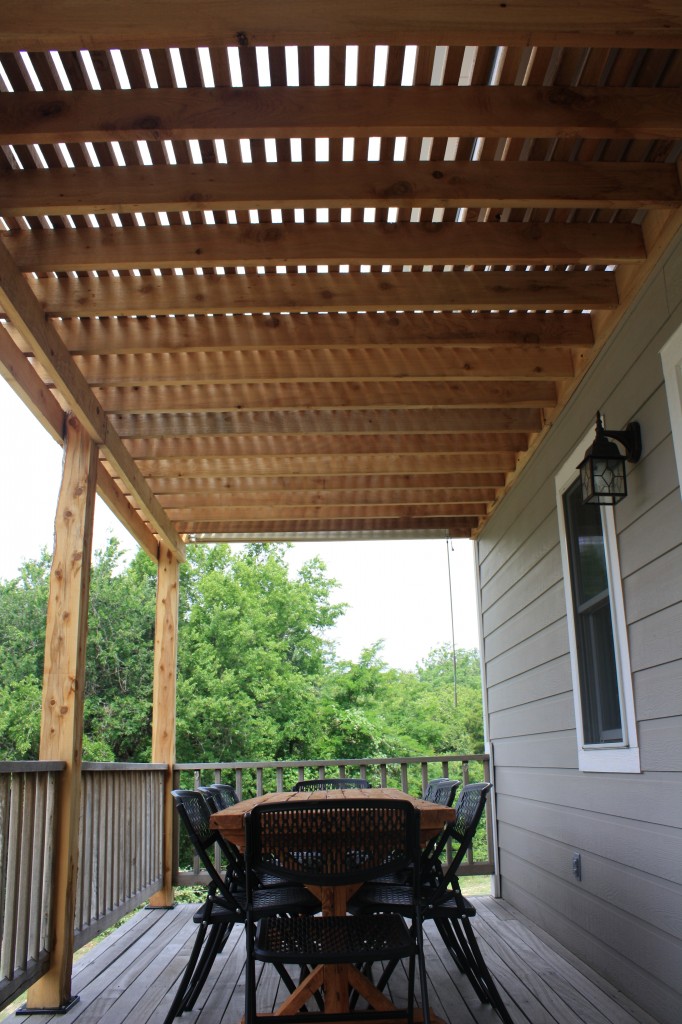 In typical pioneering fashion, Hubs decided that buying 4 x 10 cedar posts equalled crazy when we had so many western cedar trees taking up valuable space on our own land. So a few weeks before installation began, he felled two trees and hauled them to the sawmill. With the rest of the cedar purchased, Hubs and Oldest spent the windiest weekend in recent history perched on ladders on a two-story deck building a pergola that would still hold up the porch if the brick pillars underneath ever gave way. 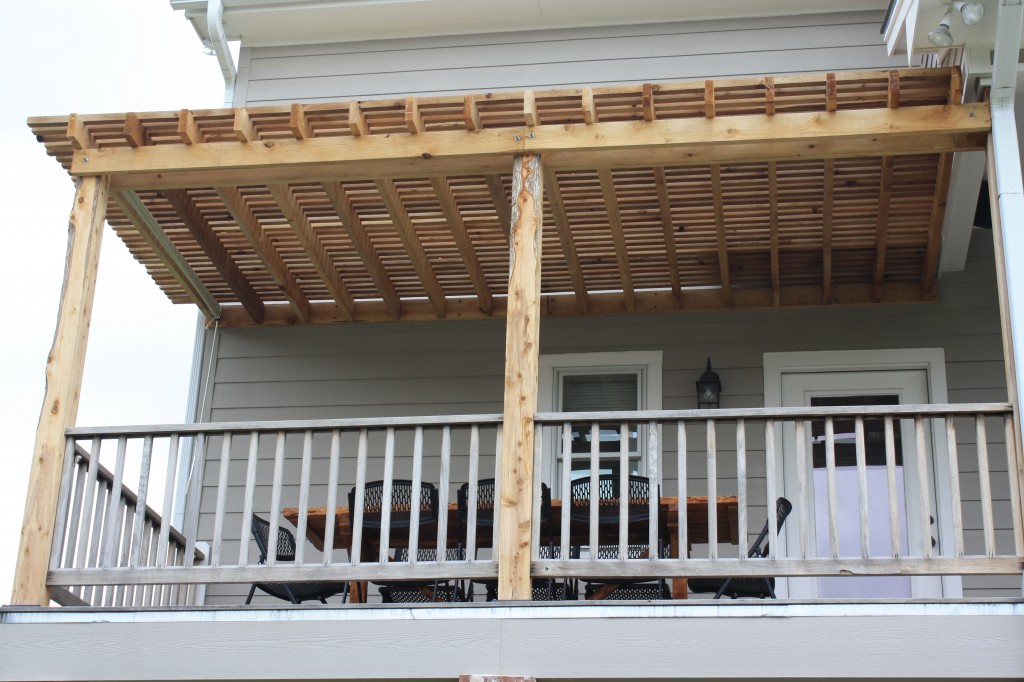 One exterior roller shade later, and the space that used to be avoided in the evenings is now a wonderful place to dine. 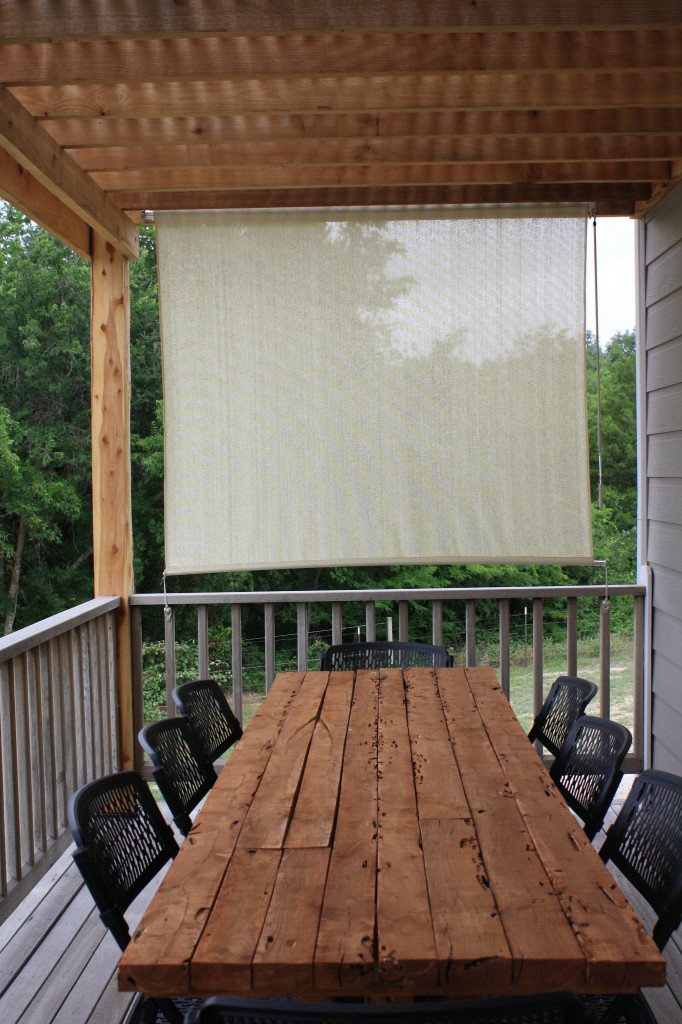 Yeah, this present blows macaroni frames out of the water.

Know what’s better than picking a blackberry straight from the vine, rinsing it, and popping into your mouth? 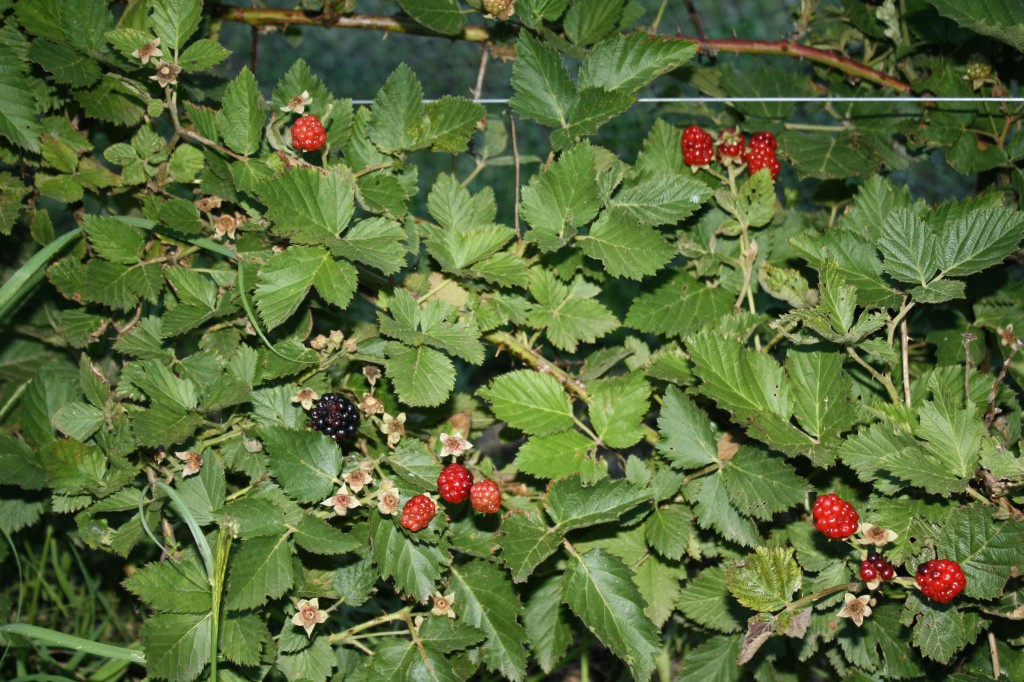 Watching them doesn’t make them ripen faster … I might know from experience. 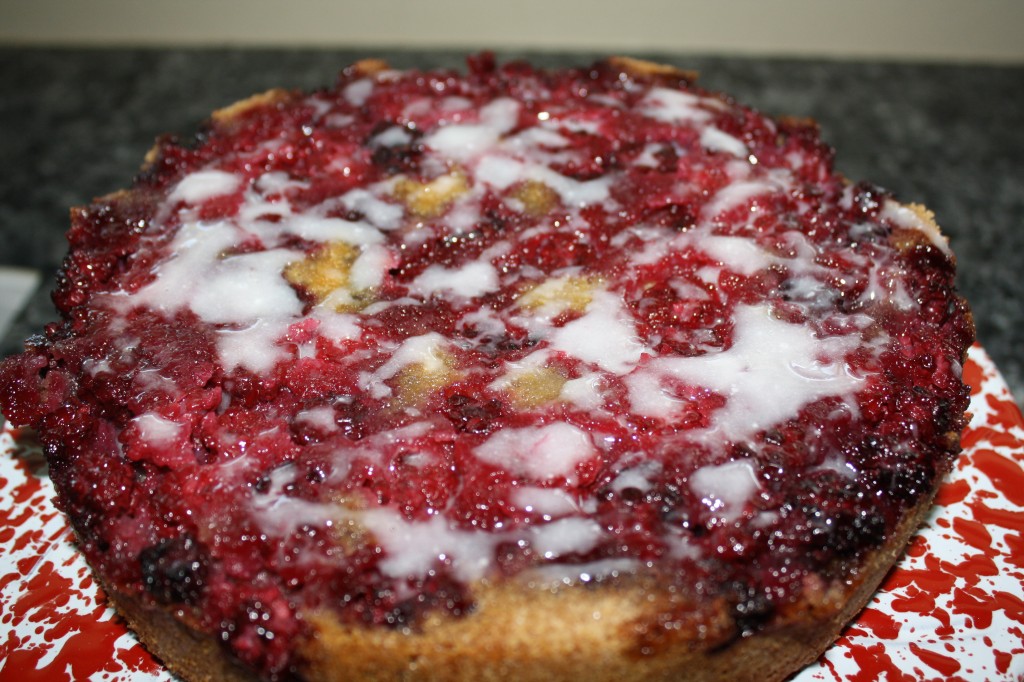 I whipped up a lemon glaze and drizzled over the top.

Our blackberry patch is producing it’s second harvest only one year after planting. We tied the canes up on the trellis and randomly watered, but these babies just appear to love their space. I covered them with bird netting recently to thwart the feisty blue jays but it’s trapping giant dragonflies so it will have to be removed. The dark clouds that hoover twelve feet in the air at sunset around here are actually hordes of dragonflies feasting on unsuspecting mosquitos. Therefore, dragonflies make the save at all costs list.

Hopefully, Ollie, the decoy owl will scare the jays from stealing our fruit. 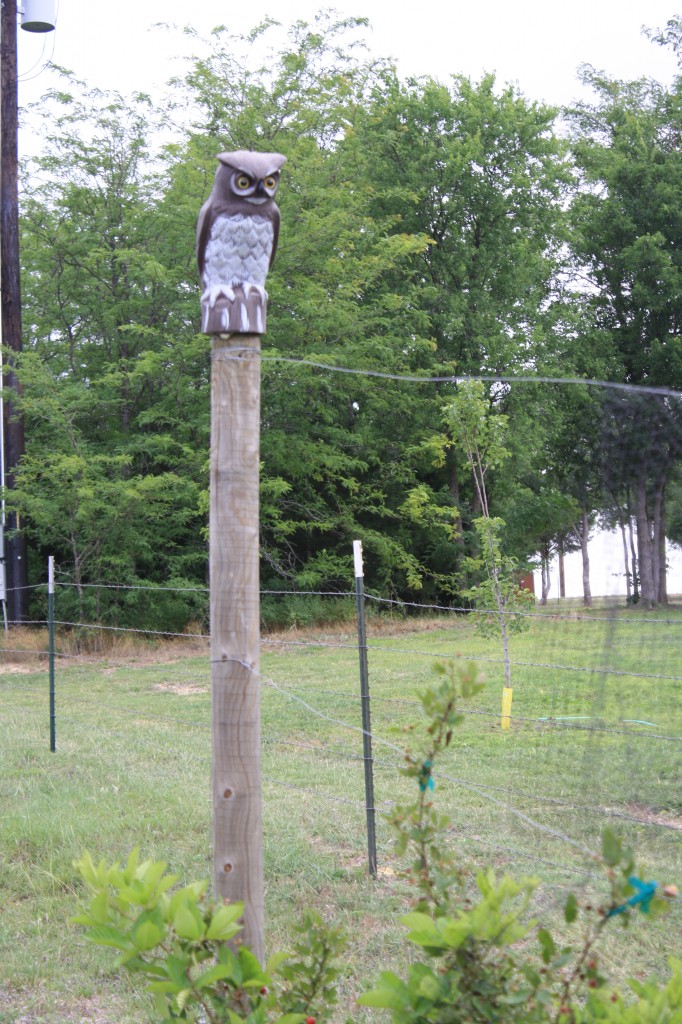 I haven’t had to spray the blackberries with anything since we have a few assassin bugs living among the thorns waiting for a passing meal. They are super creepy but helpful as a natural pesticide. 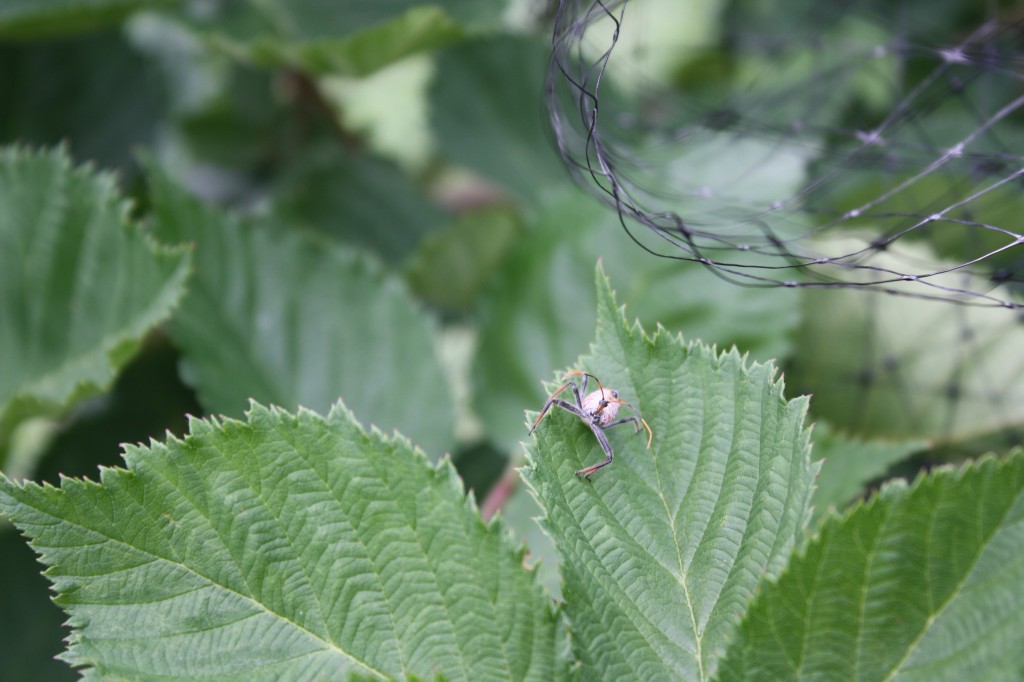 Just one of many assassin bugs prowling the blackberry patch.

The varieties we grow include:

It’s good to diversify any group of plantings to avoid the spread of disease and to stagger harvest times. I don’t mind canning, but I don’t want to spend three entire days preserving 100 pounds of berries when they all ripen at once.

Come this fall, we will bend the canes to the ground and cover with dirt, this is called tip layering. Those canes will produce roots and make new plantings by the next spring that we can transplant to another trellis.  While the process takes patience, it’s free! 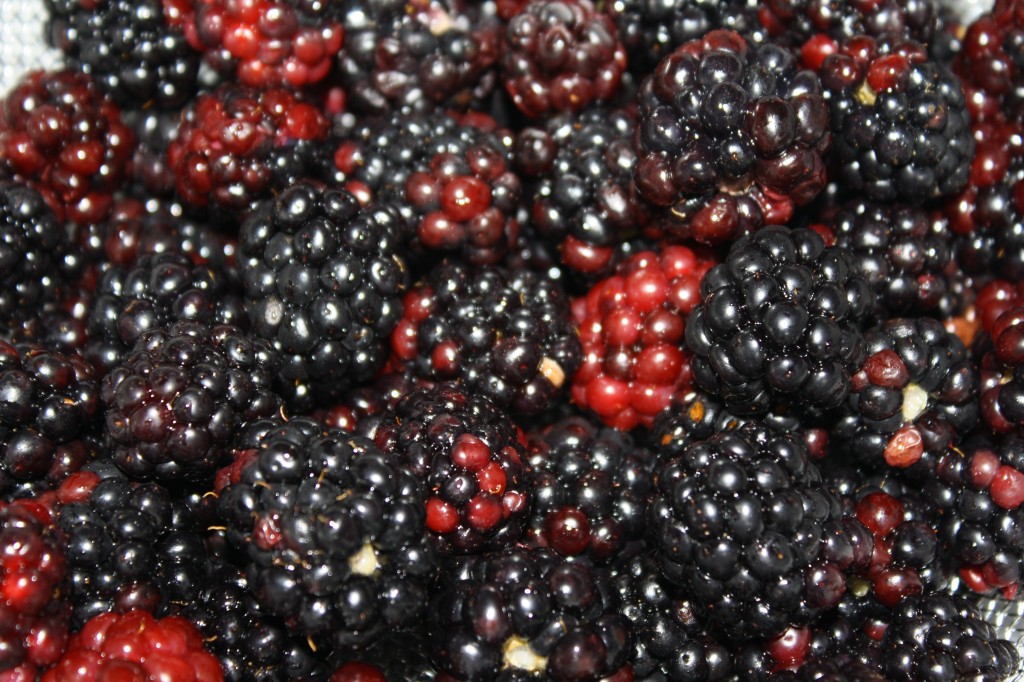 After living in three houses bought with the knowledge that they would later be sold, I have spent my entire married life decorating in neutral. I survived the bland by promising myself that someday I could do whatever I wanted with my house.

That day has finally come.

Our front porch rockers and swing needed repainted and as I stood in the paint section at the local hardware store with the white spray paint in hand, something inside me broke loose. I just couldn’t bring myself to take it home, not when all the other bright colors were calling to me. So the furniture went … teal.

You know you are on the right track when bees buzz around your painting project with the mistaken impression they have just hit the jackpot.

Now I’m paying it forward. I give you permission. Do it. Paint it bold. Let the neighbors stare. 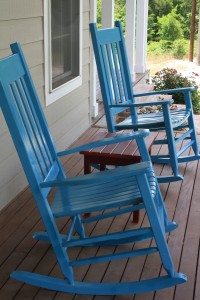 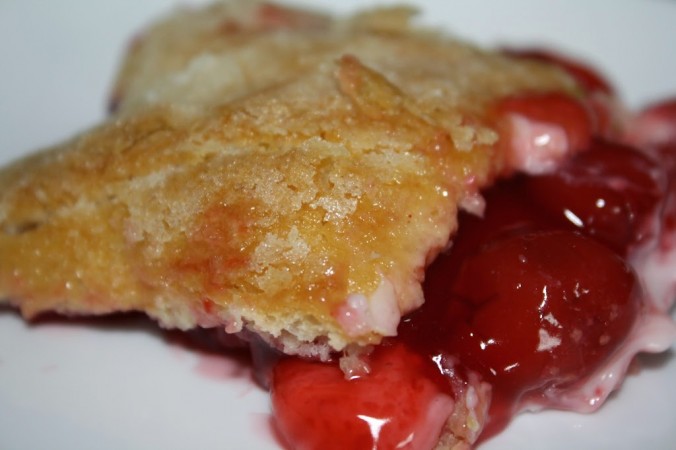 If you have spent any time around my table, you know that my family is made up of foodies. If I’m cooking, you can bet that at least one of my three boys (and definitely Hubs) is at the counter either helping or watching. Well, Hubs is watching and tasting- he claims he’s quality control.

While I can follow directions like a champ and sometimes adjust recipes, I’m not great at making things up from scratch. So I want to share some of the amazing recipes food bloggers are putting out there that my family has tried and loved.

The first recipe up is from one of my go-to blogs for amazing desserts: The Country Cook. We made the Crescent Cherry-Cheese Cobbler and it earned rave reviews from everyone. Hubs ate most of it by himself … in one sitting. Not a problem for him since he spent two hours hoeing my garden (God love him), but for those of you who want to cut calories here are some things you can swap out:

If your family or company are not fans of cherry, swap out the fruit filling with apple, blueberry, peach or strawberry.