If you want to know how to grow potatoes in trashcans … this is not the place to find out.

But if you want to laugh and learn from my mistakes, stay tuned.

I first heard about trashcan potatoes when I was minding my own business at a gardening class sponsored by my local extension office. I overheard two old-timers raving about the enormous potato harvest they got after attempting to grow them in plastic trashcans.

So Youngest and I followed the formula: drill drainage holes in the bottom of a new trashcan, add enough dirt to cover the tuber, allow to grow to about eight inches tall then add more dirt, keep watered and repeat several times until the plant fills the trashcan and the greenery dies back. 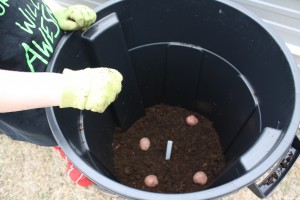 We watered and added dirt all season. As the plant grew, so did our hopes. Then, after the foliage died back, we dumped the cans and found …  nothing. Not a stinkin’ thing.

Okay, not nothing, we grew four tiny potatoes.

I have wracked my brain trying to figure out what went wrong. The only thing I can come up with is that we should have tried a metal can instead of a black plastic one. Maybe the black plastic made the soil too hot under the Texas sun? Maybe I got bad seed potatoes. Who knows?

I’m willing to try it one more year in a metal can that reflects light before I call it quits. If you’ve had luck growing the garbage can tubers and have advice, please send it my way.

On a happy note, the rest of the plants in my garden yielded insane amounts of food. I’m still getting tomatoes, watermelon and peppers. The cucumbers, pole beans, squash, and zucchini finally called it quits after filling mason jars, freezer bags, and tummies all summer.