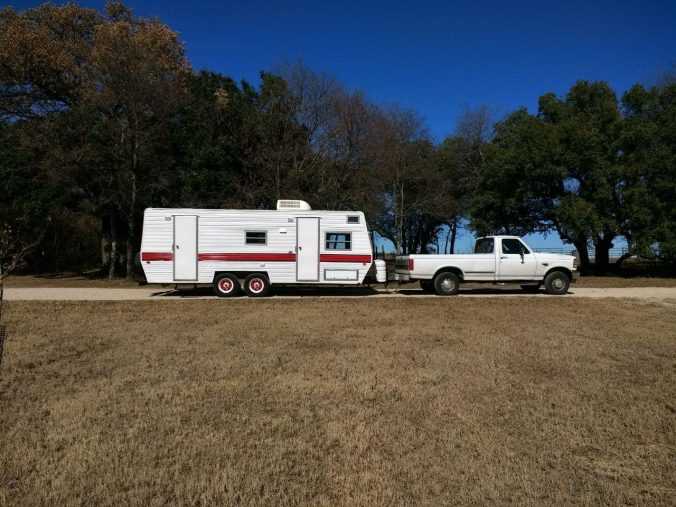 I’m not gonna sugarcoat it – we’re grumpy. The camper takes its inaugural trip soon and we all feel immense pressure to get everything finished.

Make no mistake – it’s not going to be completely finished. Oldest will be camping next to us so he can use our 5th wheel for most things. For now, he has a working bathroom, a bed, a heater, and his refrigerator works.

I’ve spent the last 3 days in various yoga positions painting the interior of the camper. Grant chose Valspar Gravity for the ceiling, walls, and upper cabinets. Naturally, it all needs 2 coats even after the primer coat but the final product is really smooth.

Besides painting, we got the bathroom counter installed, the bed frame finished, the wheels painted, and new tires.

Unfortunately, new items have been added. All new cabinet doors and drawer fronts must be built. The old material is like foam covered with a laminate sticker. As soon as it gets wet, the foam-like wood bursts through the laminate sticker and that substance will not take paint.

Oldest was able to reinstall all the ceiling fixtures last night and the camper survived the trip to the store for tire installation so today is a good day.

Unless I try to walk. 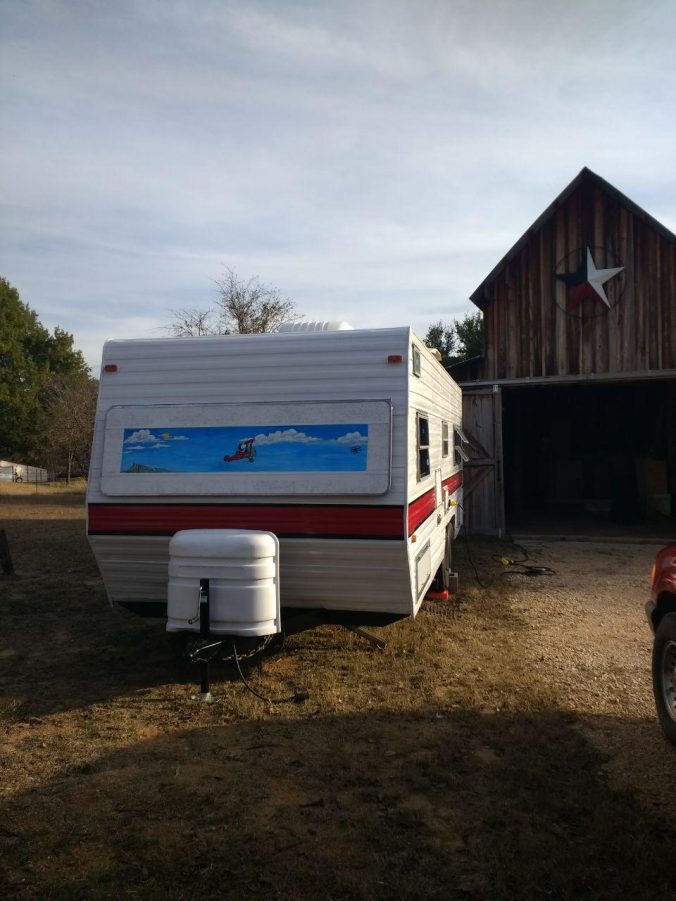 I’m sore. Like just-cut-it-off sore. You’d think I’d be used to it by now. I’ve been sore since the beginning of August.

The good news? The skin-melting temperatures are behind us. The bad news? Now it’s freezing. Literally. And let me tell you, these kinds of temps cause fights.

Hubs and I argue about whose turn it is to go out of the heated camper to grab missing tools.

So we’re sore and freezing but hopeful because now we’re putting things back in the trailer.

Demolition is kind of exciting. Fixing is demoralizing. Building is glorious.

Except for the occasional splinters and smashed fingers.

Youngest can usually be heard exclaiming, “Language!” when he makes rare appearances at the worksite. I swear we don’t abuse the english language that often – the kid just has amazing timing.

I know, we’re terrible parents. We’ll worry about it after the camper is done. Like every other thing that has fallen into disrepair since its arrival.

The bathroom wall and bedframe were built this weekend.

Hubs and Oldest gave in to my floorplan change and Hubs built a wall cabinet over the soon-to-be desk.

We rebuilt the bathroom counter since we couldn’t reuse the one I fell through. The new counter got a laminate surface that looks like concrete. Unfortunately, we couldn’t install it after we read the contact cement instructions that clearly stated the temps had to be above 65 degrees for 72 hours. The thermometer read 23 degrees outside, so the counter is in time-out in the basement.

Great progress, but the most exciting arrival was the newly finished rock guard. This awning-like piece locks over the front windows during travel to prevent rocks from breaking the glass. Previously, it depicted an ugly mountain scene.

Hubs came up with the idea and his mom, Mary Anne, worked her magic on a surface no one thought could be painted. We all adore it. It’s perfect for Grant since he’s a pilot and loved snoopy as a kid.

Hubs favorite part of the weekend? Moving the camper to the barn. Now it’s closer to his tools.

The camper couldn’t be moved previously due to two windows that wouldn’t close. Thanks to blacksmith Eric who forged new hinges and mailed them from OKC, we were able to install the windows and move the trailer.

We also got this package in the mail.

Did you know you can have an air compressor emergency? Me either. But that’s what the box says. Many thanks to Ingersoll Rand for fast-shipping out the part for our broken air compressor.

Because building things the old-fashioned way is overrated. 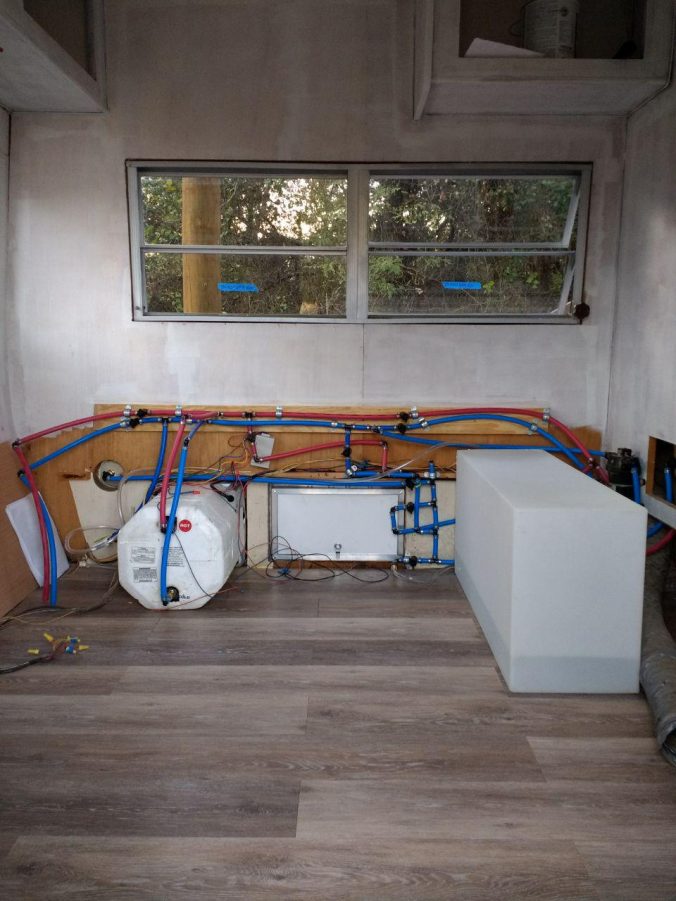 It all makes sense - trust me.

Flusing Away All Our Fears

We passed a giant hurdle this past weekend.

For those of you that RV, you understand. For the rest of you – tanks that hold what they are supposed to hold are THE most important aspect of a camper.

Except for tires. But those will come soon.

The black tank, the gray tank, the water heater, and the freshwater tank are now installed and have been tested. No leaks!

Hubs used residential PEX to create a complicated system of valves that can be shut off easily if any plumbing fixture begins to leak in the future and will still allow the other fixtures to be used. Oldest will be able to walk into any home improvement store and get new parts and install them in minutes. All the lines can be drained for winterizing the trailer when not in use. PEX won’t freeze and burst but Hubs mounted it to the underside of the future bed to keep it in the heated interior.

We also installed the toilet. Never has flushing brought me so much joy.

There might or might not have been a fifteen-minute period where the three of us stood around the kitchen sink turning the faucet on and off.

Just because we could.

I also finished filling the hundreds of holes in the wood walls this weekend and completed the priming of the walls and cabinets.

The only complication? We decided to change the floorplan of the kitchen and bedroom.

And by we I mean me.

I know. I know. But, as I reminded Hubs and Oldest when they rolled their eyes at my idea, we haven’t started building the furniture yet. So it’ll be easy.