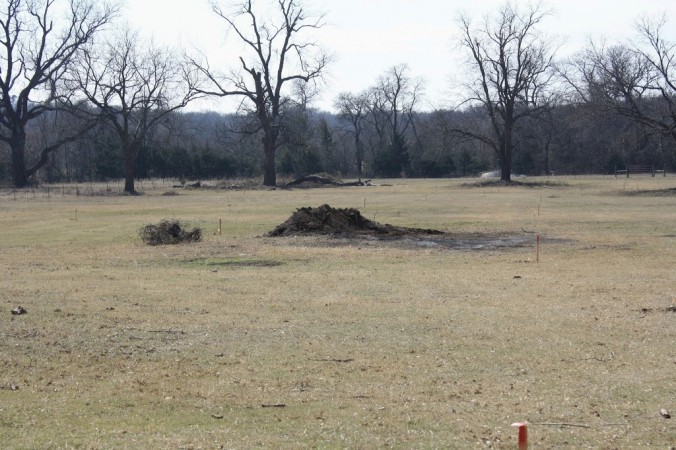 Hubs has a teensy tendency to underestimate jobs around the farm. Everyone who has ever helped us knows this and automatically adds several hours to the time estimate that Hubs presents when he asks for reinforcements.

The planting of the pecan orchard was no different.

Hubs called me and the kids down to the pasture armed with a GPS, tall stakes, kite string, marking tape, ground stakes, a satellite picture of the property with GPS coordinates marking each of the 88 trees and the promise of finishing in a maximum of two hours.

It’s a good thing we took water jugs or we might have died before we emerged three days later.

You read that right. Marking took three days. Threes days of stretching kite string over a 7 1/2 acre area, north to south, east to west, and southwest to northeast.

It sounds ridiculous, but do you have any idea how much pressure is inflicted on a person when they have to plan out something that will undoubtedly outlive them and their great-grandchildren? Can you imagine future generations walking among the towering pecan trees and commenting on the terrible job Pops and Granny did when they lined up the rows?

That thought haunted Hubs every minute of those three days.

We tussled with Mother Nature as long as we could, trying to force her into planned perfection. Turns out, she’s the free-form artsy type and we had to throw up the white flag before we completely wore away the soles of our boots.

Compared to the four hours it took four adults and three kids to dig up, replant and hand-water 77 seedlings two days later, marking was by far the worst of it. Well, maybe not as bad as clearing…or woodpiling.

I know it’s not a word. But it should be.

Woodpiling is horrible, it never goes away. I guess that’s what you get when you toss it all in a big pile on the ground because you can’t take any more. At least I’ll be smiling as I throw each and every piece in the fireplace instead of flipping on the heater in the winter.