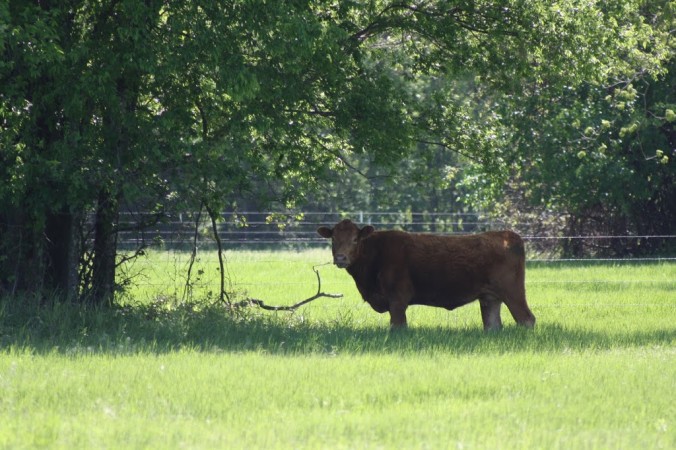 Remember manly-men? I have discovered another breed of man…farmer-men!
They are the leathery, gentle souls that frequent Tractor Supply and feed stores. They drive trucks caked with dirt, and often haul livestock trailers. They can be identified by their boots, cowboy hats, and weathered grins. Farmer-men chuckle at little boys wearing boots, and refuse to allow a woman to open her own door, even if their arms are laden with heavy bags. They have large rough hands that can rebuild a tractor, and comforting spirits that ease a heifer delivering her first calf.
I have had a day surrounded by farmer-men. Older, wiser men who guided me through the maze of questions boggling my mind.
First at Tractor Supply, trying to find a latch for the gate that would keep a Limousin in but not keep me out. The younger lads were trying to help, suggesting complicated looking devices. The older farmer-man saw the concern on my face and offered assurance that only a simple latch was needed. And with a twinkle in his eye the older teased the younger that cattle do not, in fact, have thumbs so complicated gadgets are not necessary.
Second, the farmer-man who delivered our pregnant cows safely. He answered my rapid fire questions easily, never making me feel stupid for asking. Although, his eyes did widen when I asked if his cows typically ate the afterbirth or if they left if alone. But he quickly recovered, answered me, and I continued with the inquisition.
I must admit that I was thrilled when a seasoned farmer-man emerged from the extra large cattle trailer to meet me this morning. I have been studying so much information about cows that I had driven myself into a panic by the time they arrived.
My relief at his experience lasted until I actually saw the cows.
I had read that Limousin cows are one of the largest breeds. I knew approximately how much they weighed. But when I caught a glimpse of the first head peaking out from the top of the trailer windows an expletive burst in my mind.
I actually had to glance around to make sure that I hadn’t said it out loud.
But the three-year-old mouth next to me didn’t repeat it, so that was confirmation of my silence.
Unfortunately my eyes betrayed me. When momma cow’s eyes met my eyes, her’s widened in alarm and she started trying to turn circles in the trailer.
That was my cue.
I jumped down from the side of the trailer and quickly instructed the nice farmer-man where to turn out the girls. As soon as he opened the gate the cows bolted for the grass. As soon as the grass touched their hooves, they transformed from harried wall street brokers to a couple enjoying a beach vacation. The momma cows sauntered, side by side, around the perimeter of the fence taking in all the sights and sounds.
After 30 minutes of stalking with a long range camera lens, I deciphered two distinct personalities in the cows. One is incredibly laid back and loves her some green green grass. The one I locked eyes with is much more aware of her surroundings. She watched me for the full 30 minutes that I watched her.
Or maybe she was posing for the camera.
Time will tell and time will bring baby cows. The calves are due in July, so I have 3 months to get to know the mommas. And the births will determine how intimately we have to get to know each other… 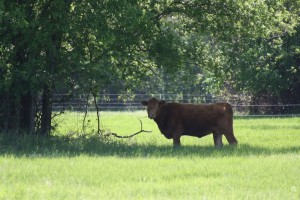 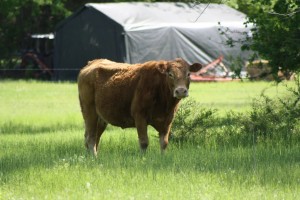